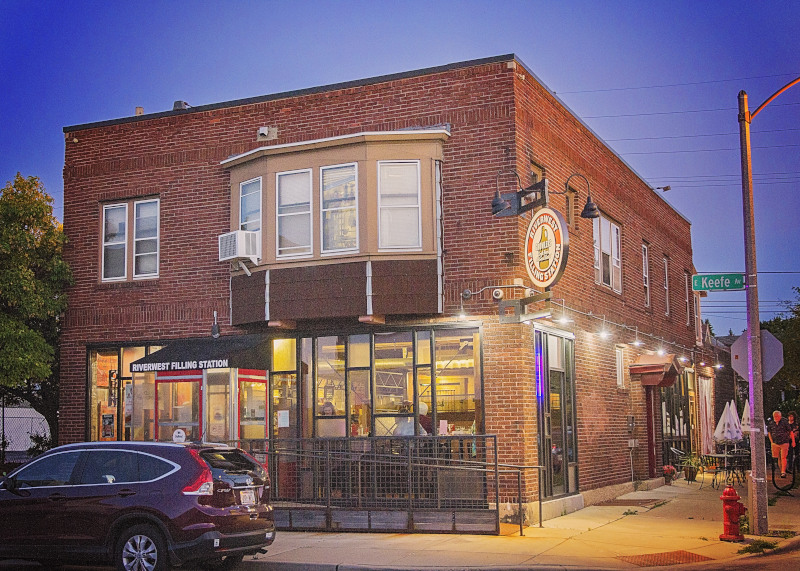 The Riverwest Filling Station was born out of more than just a love of food, beer, and liquor. It stemmed from a love for adventure and community and fuses it with a healthy dose of lifelong curiosity from owners Bryan and Miriam Atinsky. Combining Middle Eastern, East Asian, and various American regional influences, there’s a taste and a menu option for everyone. This neighborhood stop welcomes all, no matter your needs or preferences–whether you’re bringing in the kiddos or require a handicap accessible dining space. You may relax in knowing that we’re all here for you to enjoy your next great meal and drinks in Milwaukee.

Established in February of 2013, The Riverwest Filling Station has grown to become a landmark for its food, bar, and growlers. Co-owner Bryan, spearheaded efforts to change city law, working with his local alderman to legalize the sale of growlers. After you’ve seen the eclectic menu at The Riverwest Filling Station, it should come as no surprise that the owners have had quite the adventures behind them.

Even as a child, chef/owner, Bryan, acted on his passion for cooking. He’d tell his parents, “I’m going to cook dinner,” and then go and grab one of the many cookbooks in his childhood home, selecting the most elaborate recipe he could find. It’s safe to say that his cooking skills have improved, but his curiosity still persists. Nowadays, you’ll find him fusing Middle Eastern, East Asian, and varied American regional styles on one menu. Bryan's wife and co-owner, Miriam, originally from Brazil, also shares a childhood background of taking the reins during dinner time. She would often lead dinner prep on Sundays, to allow her mother to have some time off. From childhood, she's had a knack for whipping up her own creations in the kitchen. Now, she helps Bryan run the restaurant as front-of-house manager and bartender, bringing her own style into the mix.

Bryan chose to open shop in Riverwest because it’s “the most integrated neighborhood in the most segregated city in the country.” Community and activism are central to the mission of The Riverwest Filling Station. In line with Bryan’s long-time passion for promoting equality in Palestine/Israel, through his journalism and activism, Bryan connects to the local community here through the good drink and wholesome food, crafted with quality, care and attention, as well as offering the use of the space for community events. 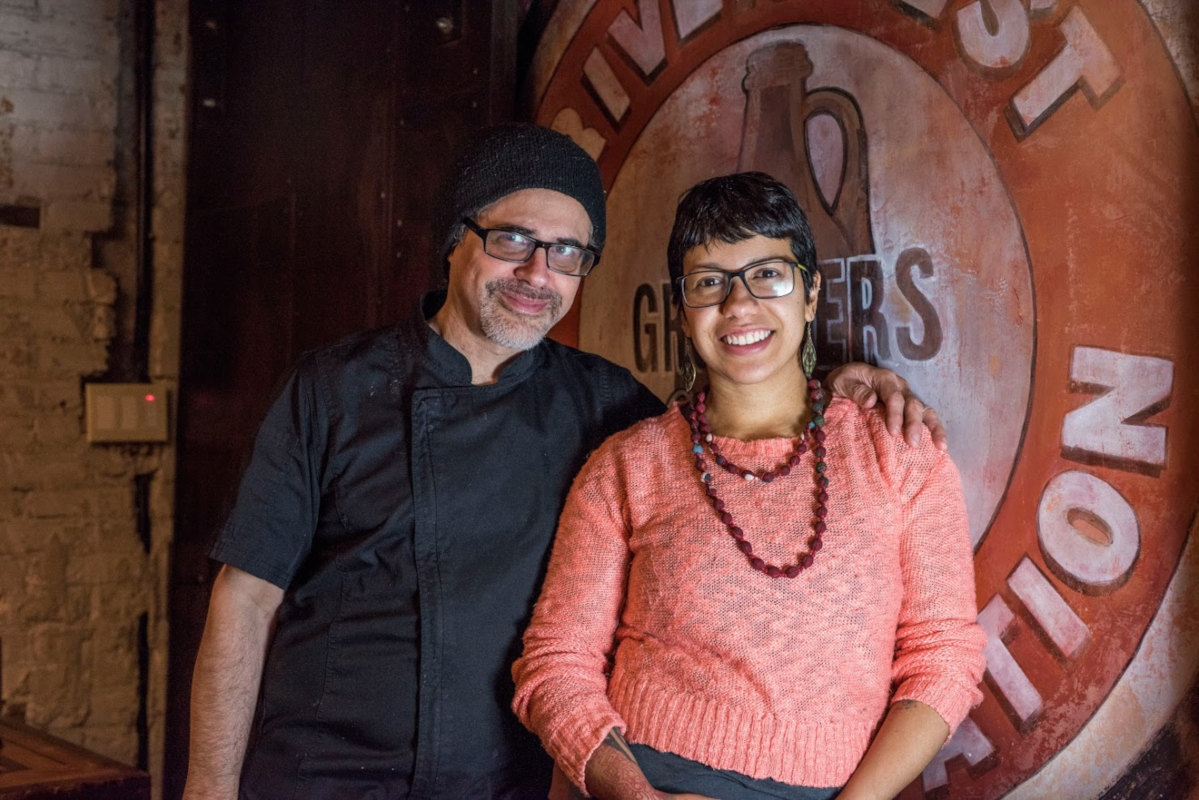 Hailing from Sao Paulo, Brazil, Miriam has honed her business management skills since she was 13 years old. She graduated with an MBA in Business from FGV University in Brazil and is now co-owner of The Riverwest Filling Station. She has always had a passion for theater and dance and enjoyed performing in her local community, both in Brazil and here in Milwaukee.

Miriam's background has led her throughout this hemisphere, taking on a variety of business ventures and arts. For more than 5 years, Miriam worked in Trisul, one of Brazil’s most successful large-scale real estate and construction companies, both as a financial analyst and senior investor relations analyst. She even worked for the City of Guarulhos in Brazil for 4 years as an assistant to the Alderman. Gaining that position stemmed from proving her prowess as an engaged community activist at just 16 years-old. Among her non-professional endeavors, Miriam was an avid runner in Sao Paulo, Brazil, until wear and tear on her knees prevented her from continuing. In her search for alternative exercise, Miriam discovered yoga and learned about its strengthening and centering attributes. While discovering her love for yoga, she also ventured into the healing effects of traditional Thai massage. When she moved to Milwaukee in January of 2014, she continued her yogic journey, as well as becoming a Thai Bodywork practitioner in 2017.

In January of 2014, Miriam had the opportunity to come to Milwaukee to study and improve her English, towards developing her ability to work in the international sphere of financial analysis. To her surprise and joy, she met and married Bryan, making Milwaukee her home.
At present, she works as the front-of-house manager, and as of January 2020, has become a naturalized American citizen. She has enjoyed learning about the intricacies of small business alongside embracing the vibrant Riverwest community. You'll have to grab a drink at the bar and ask her about her favorite parts of being part of the Riverwest community.

Even as a child, Bryan, acted on his passion for cooking. He’d tell his parents, “I’m going to cook dinner,” and then go and grab one of the many cookbooks in his childhood home selecting the most elaborate recipe he could find. It’s safe to say that his cooking skills have increased, but his curiosity still persists. Nowadays, you’ll find him fusing Middle Eastern, East Asian, and varied American regional styles on one menu. Bryan’s vast variety of past experiences have built his eclectic taste presented to you today.

Bryan studied history in university while also working in the back-of-house in restaurants. Cooking was always a significant part of his life. During his undergrad, he became a state government correspondent in the U.S. But, after a couple of years, he left to pursue graduate school in Middle Eastern Studies at the Ben Gurion University of the Negev. While there, he became a full-time journalist and Executive Editor, covering the Israeli-Palestinian conflict. Political activism and journalism consumed Bryan. Meanwhile, his hobby of cooking continued, taking himself from a sous chef in Tel Aviv to a chef in Jerusalem. While busy with his journalistic endeavors and hobby of cooking, his sister, Lisa, brought up the idea of opening a restaurant that focused on cuisines from all around the world. It became a dream. But a dream that would remain so for a long time. It wasn’t until Bryan came back to the states following an unfortunate accident that took his family from him, that he began to put his dream to the test.

Returning to Milwaukee, Bryan realized that there was no need for a local Middle East correspondent, but there was still the drive for his dream that he and his sister idealized in times past. Once he said he was going to do it, it happened. He didn’t want a theme for the restaurant. This space would offer anything that Bryan found a liking for. Indonesian? East Asian? Middle Eastern? Southern American? Sure thing. Even growlers! Milwaukee law stated that growlers could not be sold at restaurants or bars, but growlers were an integral part of Bryan’s vision for The Riverwest Filling Station. So, he worked with local city officials to legalize the growler, and become one of the first in Milwaukee to serve them up.

From there, The Riverwest Filling Station has developed and thrived. Once you stop into the Filling Station, you’ll see why it’s continued living on in Riverwest. Community is the driving force behind this space–one which Bryan designed and helped build himself. Quality and care go into everything–from the CBD cocktails, the house-smoked meats, to the customer service. We encourage you to stop in for a drink, stay for a bite, and return as a friend.